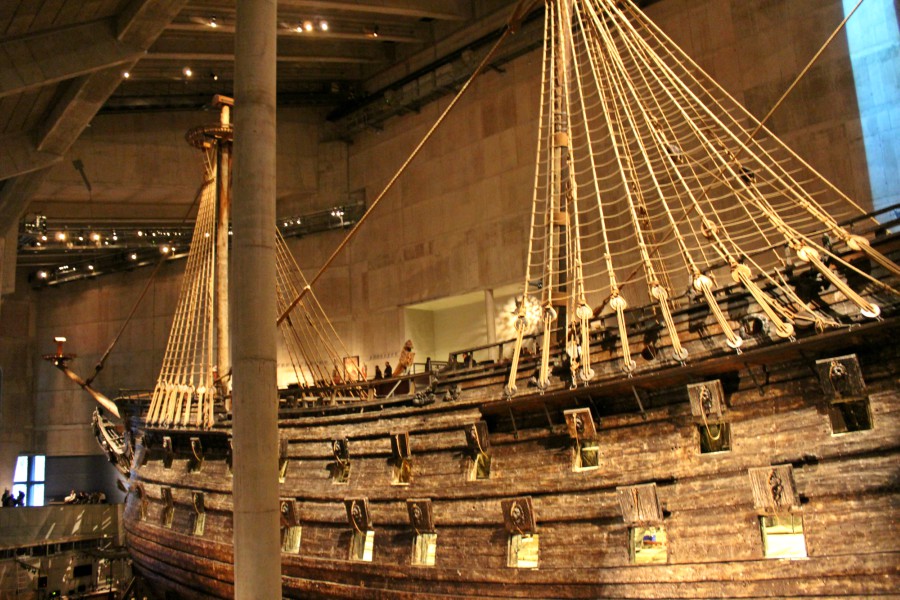 Happy Travel Tuesday! While we were in Sweden, we had the chance to have Stockholm Passes to visit the best that Stockholm has to offer. This meant we visited a lot of the very touristy spot of the city. While I would love to do a post for every single item, I thought I would blog a wee bit about some of my favourite visits in Stockholm. I’m starting today with the Vasa Museum, which was the Brit’s favourite.

How to get there
The Vasa Museum is located on Djurgården, an island situated just east of Gamla Stan, the old town of Stockholm. That is where you can also visit the Skansen Open Air Museum and the Nodiska Museum. To reach the island, you can take the ferry directly from Gamla Stan to Djurgården and walk a few minutes to the big building that houses the ship.

Entrance costs 130SEK – but it’s free with the Stockholm pass! In the winter, when we visited, it’s only opened 10-5, but over the summer, they extend the hours 8.30am until 6pm.

About Vasa
Vasa is the name of the massive war ship ordered by King Gustavus Adolphus. It was built in the years 1626-27, designed by master shipwright Henrik Hybertsson.

At the time, Vasa was to be the biggest warship in Europe, and possibly the world. It is 69 metres long, armed with 64 cannons, outfitted with 10 sails and imposing at 50 metres of height. However, there is something not quite right with the build. Despite calls to delay the sail as the ship rolls too much, it is still launched at sea in summer 1628 with pressure from the king. It’s on that very day, 10th August 1628, that the ship makes its first and last trip. The maiden voyage lasts just over 1 kilometre before the ship sinks. Talk about an anticlimactic moment! 30 people died during the event witnessed by many inhabitants of the city.

In 1920, interests starts again to find the ship. It’s finally in 1959 that the city, with Neptune Company, starts working to free the ship from the mud. They sent divers in to pass cables through the bottom of the ship, to then lift it. It’s not as simple as that, as it takes nearly two years to prepare the ship. It’s finally in 1961 that the ship is pulled to the surface, after 333 years at the bottom of the harbour. The following year, a museum opens to allow the public to see the famous ship. It’s also in 1962 that the preservation operation starts; it’s a fascinating process that takes nearly 30 years. Finally, it’s in 1990 that the Vasa Museum we know and love opens.

What to see and do at the museum
The museum enters straight away onto the main hall, which houses the gigantic ship. It dominates the room, standing tall above the small people who wander around admiring it. It’s very imposing! It shows just what an engineering feat it was, fiasco or not!

The ship itself is interesting to walk around and admire. But my favourite bits were the exhibitions. The exhibition recounting the preservation effort was my favourite part. It shows the processes, what was used to spray the wood so it wouldn’t shrink, over a 17 year-period  and how it took 10 years to dry!

While I would have loved to walk on the ship, I realise that’s a bit greedy, especially for a preserved 17th century ship. However, there is a cool part of the museum, toward the back end, in which you can walk on a recreated deck.

I also want to make a note of two other exhibitions. The exhibition Face to Face, about the bones of the people who died on the ship. An investigation of the bones have recreated what people may have looked like and what their lives may have been like. It gives a face to 17th century Sweden and to this disaster. There is also Vasa’s Women, which focuses on the living conditions of women at this period of Swedish history.

Finally, if you’re feeling a bit peckish, you can grab a bite to eat at the restaurant inside the museum. Like most museum restaurants, it’s a bit expensive for what it is (and it’s Sweden after all!), but it’s all very delicious fresh products. 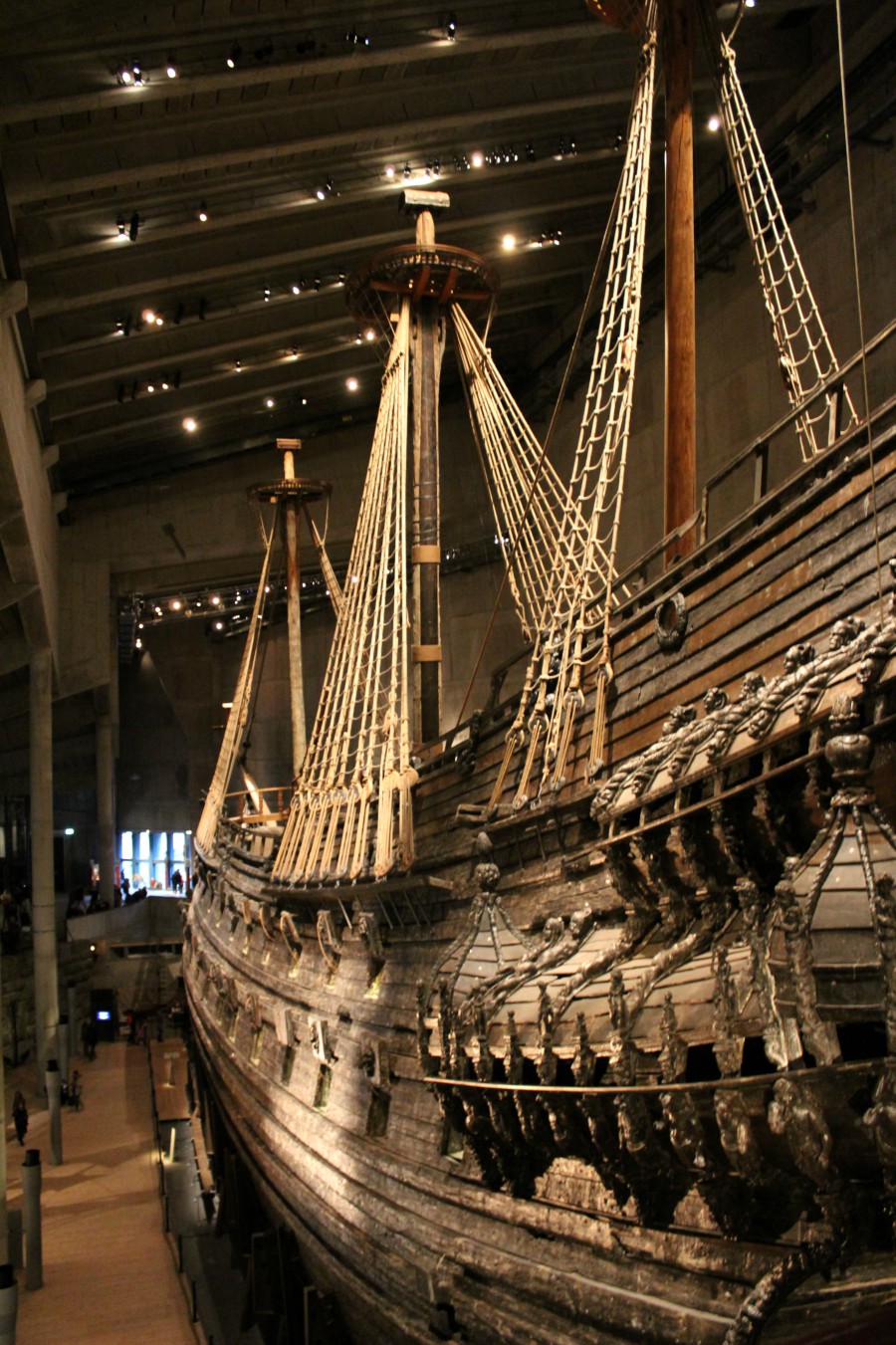 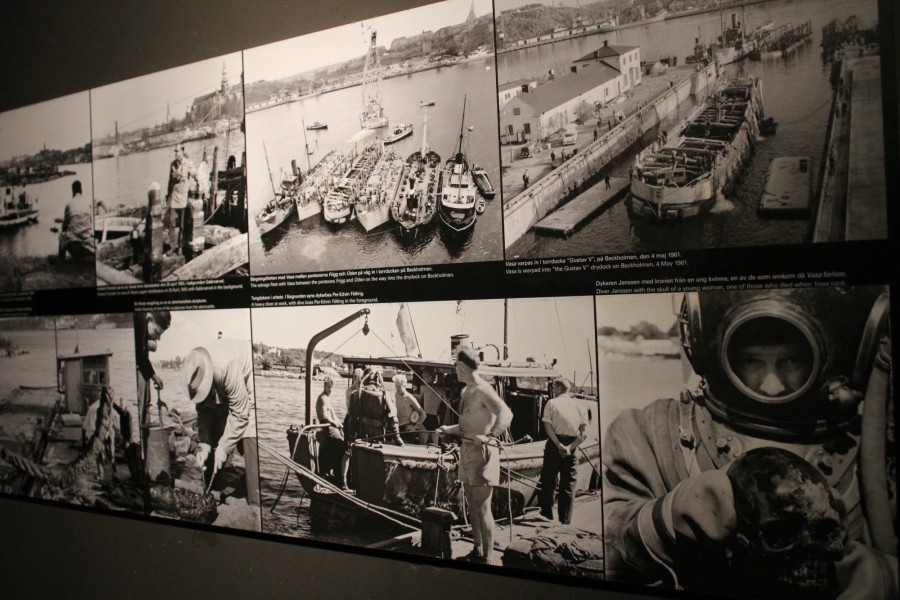 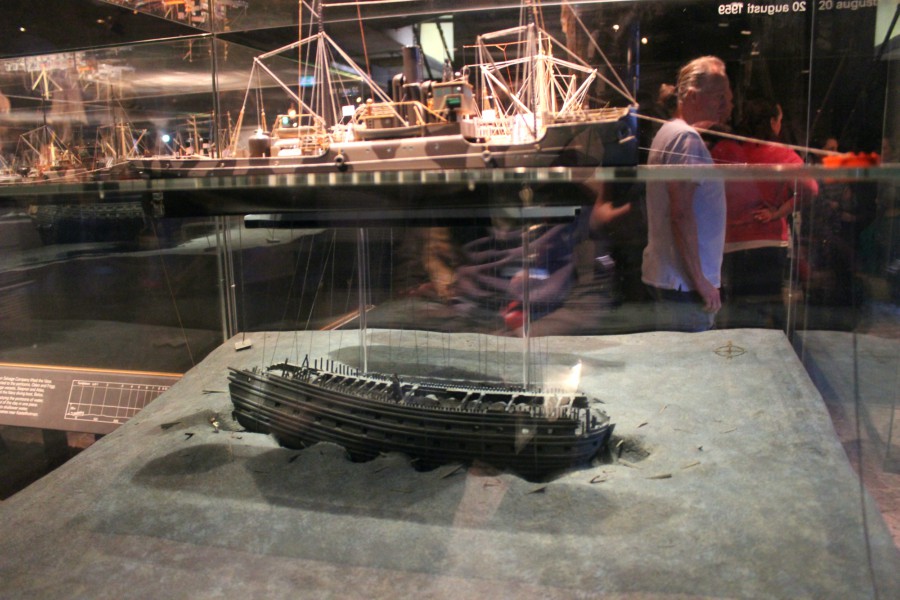 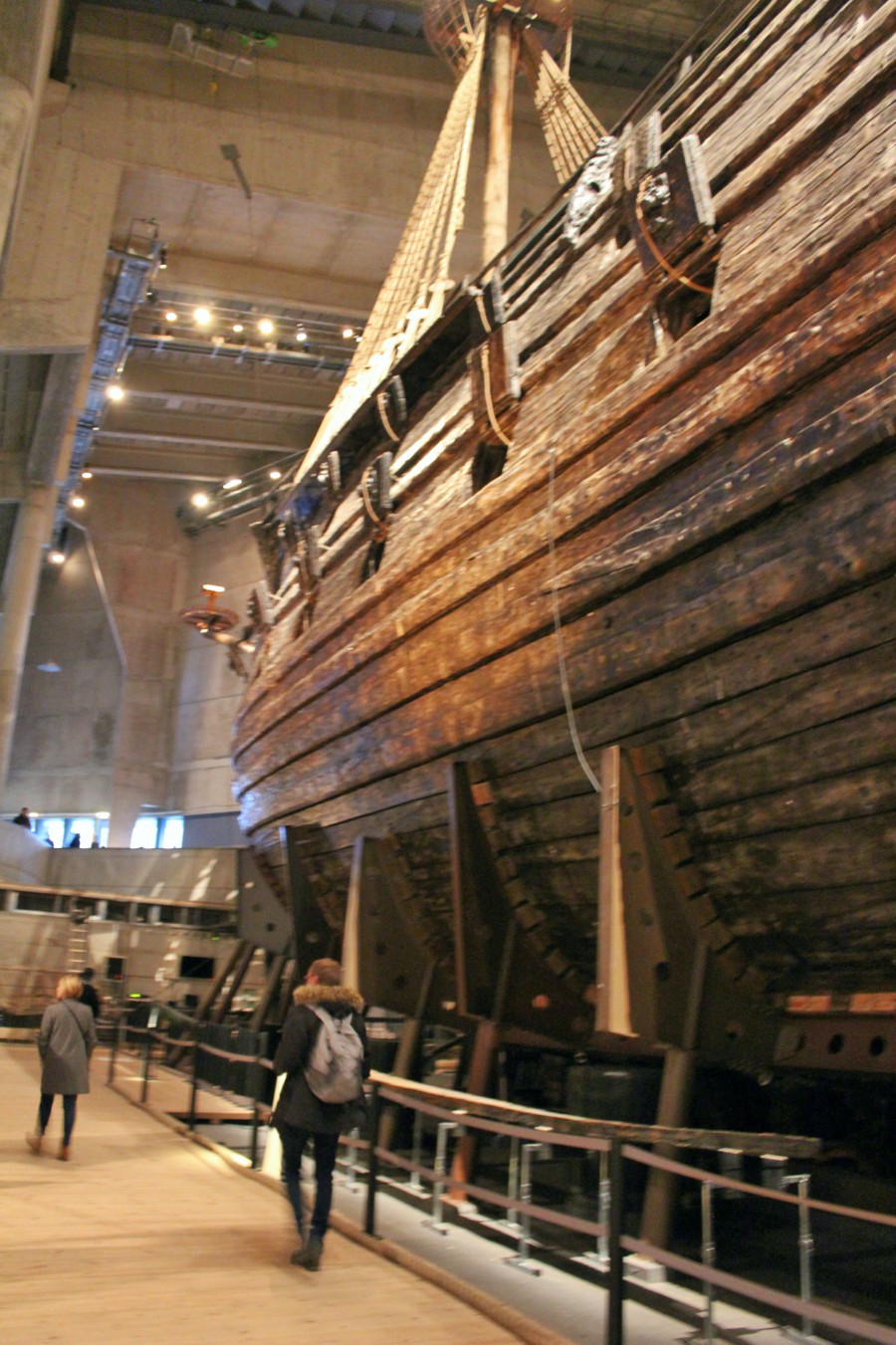 Just a wee blurry photo to show how small my Brit look next to Vasa! (also his left leg has disappeared…spooky…) 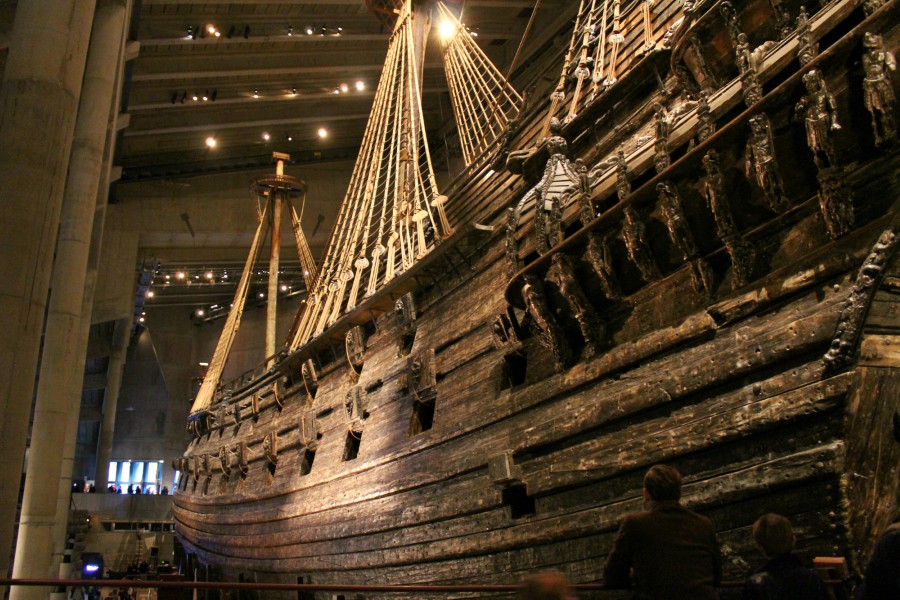 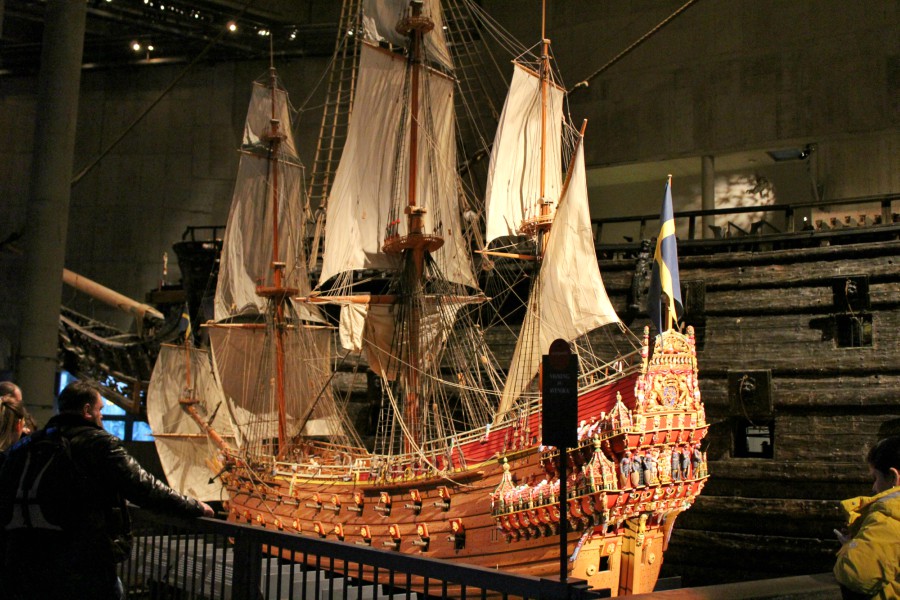 I highly recommend visiting Vasa because it’s so impressive and really interesting to learn about a part of Swedish history. If you’re not convinved that it’s worth it yet, it is apparently the most visited museum in all of Scandivania, so that tells you something!

Have you visited Vasa Museum or another museum in Stockholm?xx 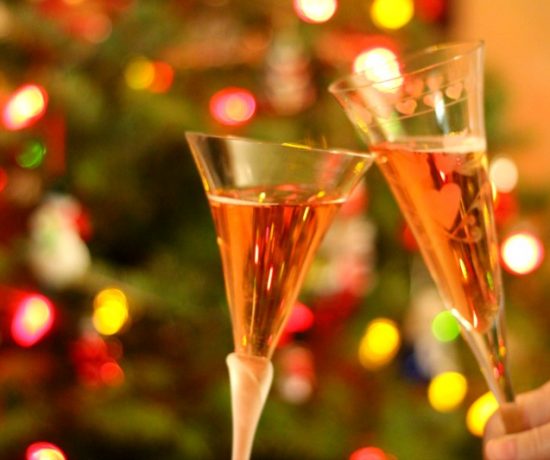 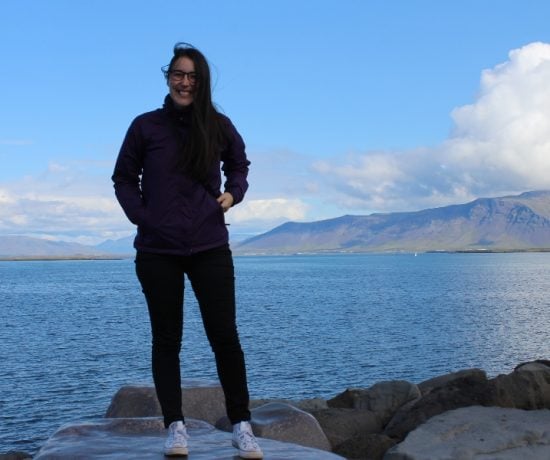 Top 10 Travel Experiences of the Last Decade | 2010s in Review